Stolen Car, Crashed on the Quad by Local Teenagers 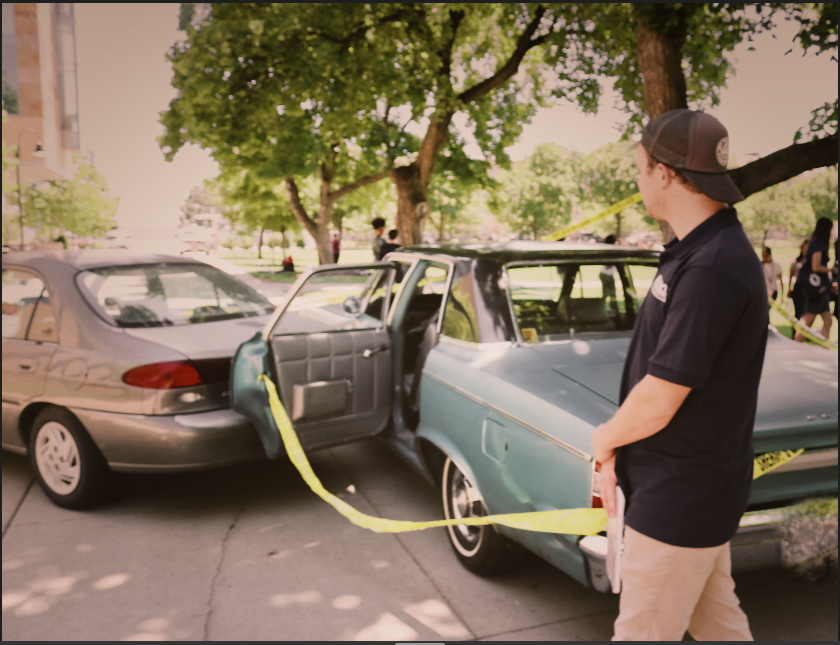 Early Wednesday morning, 3 boys stole and crashed a woman’s car at Utah State University Quad, leaving her and her baby carless, police say.  The brothers ages 13, 16, and 17 escaped logan academy mental hospital for the youth at 6:45 this morning.  They were said to be heading for Bear Lake but got confused and headed towards Utah state campus southbound finding themselves near Aggie ice cream. Soon after finding themselves in the parking lot they stole a 1969 AMC Rebel. In the moments following the 17-year-old drove the car 50 mph on the highway and turned the wrong way onto the skinny sidewalks of the Utah State University quad and crashed into a parked grey vehicle at approximately 7:21 am.  Student Jason Terry (a bystander) was walking to his marketing class this very morning when he saw the 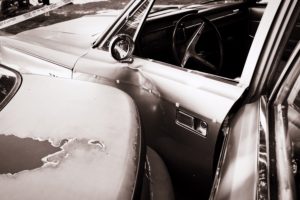 accident happen right before his eyes. He saw two kids get out of the front seat of the 1969 Rebel, he didn’t consider what he was seeing to be normal and decided to make a sacrificing move. “I stopped the driver then ran him down and tackled him until the police got there.” Jason Terry left the scene with scratches and bleeding arms from the wrestle on the quad floor.  He claims a boy had tripped over a sprinkler head while running away, the 16-year-old boy has a sprained ankle, police say. The police came soon after and took the two boys, ages 16 and 17 to a cache valley detention centre. Then returned the 13-year-old to the mental institution from which he escaped the same morning.

Many were at the scene of the accident when it happened such as Jason Terry, yet Terry was the only one injured and the others had just watched and heard from a distance.  Many reports being scared and terrified of their campus security and think highly about the fact of bettering it in the future. “I was scared but happy to be alive,” Lilith champagne had said.  Security personnel didn’t seem to help this fact, and at the same time, people felt nervous and skittish on the scene. “I’m just here to respond to the scene, make sure nobody touches the cars, please back away mam.’”  Officer Labrawan Jaymze said in answer to a question in the press conference.

The car that was stolen consequently and obviously had crashed into a grey small car that belonged to Nathan Laursen. The owner of the Rebel was mother Robyn Champion.  Champion says she was heading out for ice cream in her husband’s old Rebel with her daughter, who looked to be less than 12 months old when her car took a sudden turn on a road and broke off her side mirror.  She headed out on a walk with her daughter to go find the broken part. She came back with nothing but to find her car stolen. She said the whole situation was unfortunate. “Nobody wants to have their car stolen.” She said. She later heard news about a car crash on the Quad of Utah state’s campus and headed down with her daughter to find out if her car was involved.  To no surprise, it was. “It was frustrating, to say the least, I’m just happy my baby is okay,” Champion says as she looks at her baby and giving quick smile. Champion had been waiting at the scene all morning and all afternoon as long as the owner of the grey car.

The owner of the grey car, Nathan Laursen was coming back from his job on Utah State Campus when he saw the result of the stolen car and car crash that morning.  He said to left his car there overnight because he lives in the dorms nearby. Nathan seemed to be a bit confused and angered when he found his car crashed with the Rebel in the middle of the sidewalk by the quad.

Luckily, many weren’t injured by the case, but there is many more to be found out.  We’ll update you on further information as it arrives.